When Tom Morello decided to form his own band, he had a clear idea what he wanted: “I was really excited by the prospect of playing hip-hop music within the context of a punk rock band, and I wasn't going to make any excuses for there not being a DJ! At that time, my chief influences were Terminator X and Jam Master J, and I was determined to recreate the record scratching, DJ stuff - those rich, bizarre textures - on my guitar”. So combining Jimmy Page’s rocking riffs with Dr Dre’s funky grooves, Morello set out on a journey to explore the electric guitar in a way few other guitarists have. Using a very basic set up, he managed to create some of the weirdest noises ever recorded in a rock band - and all that, as stated on each R.A.T.M. album, with “no samples, keyboards or synthesizers”.


Morello bought his famous sixties Goya Rangemaster copy in a Canadian pawnshop. It has a Jaguar body, a strange shaped headstock and two volume and one tone controls, with two pickups. This guitar is also always kept in dropped D tuning.

Tom also likes Ibanez guitars. He owns a three pick up speciality Talman shaped guitar. It has two pick ups on the outside while the middle one is on the inside, which can make odd chirping noises by manipulating the tone knobs. Then there’s his red and black hollow body, with two volume, two tone and six specialty knobs. When pulled these knobs can make a treble bass change, distortion, wah wah and other effects.

Morello’s sickle shaped Ovation ‘breadmaker’ electric can make some very weird sounds, but looks ugly as hell according to Tom.

For The Ghost Of Tom Joad Morello used an Epiphone or Gibson double-necked EDS-1275, with both the twelve and six string parts tuned to dropped D. It has two 490R and two 490T Alnico magnet humbuckers and, like most doublenecks, two volumecontrols, two tonecontrols and a three-way switch.

Morello probably runs all his pedals through the effects loop of his Marshall head, although there seems to be some discussion about his Jim Dunlop Original Crybaby wah. The Crybaby is not only used for wah sounds but also to add extra tone, by leaving it in wah mode but in a fixed position, for example during the verses of Bulls On Parade. Other than that, the rest of his effects loop consists of the following.

1. Digitech WH-1 Whammy
(to jump a fifth, seventh or all the way up to two octaves)
2. Boss DD-2 (or 3) Digital Delay
(mostly in short slapback echo mode, especially when playing the helicopter sound, like in the intro of Cochise)
3. DOD FX-40B Equalizer
(set flat so he can boost to eleven during solo’s)
4. Ibanez DFL-10 Digital Flanger
(Japanese eighties green flanger, set for wide and slow)

Sometimes Tom put a Boss RV-3 Reverb Delay instead of the DD-3 and, right before the Ibanez Flanger, an Electro Harmonix Small Stone phaser, which was used on Guerilla Radio to flow with the flanger. Below is a pic of Morello’s pedal board used for his gigs with Audioslave, which has a somewhat different set up: there’s a Boss TR-2 Tremolo added before the Whammy (this one first popped up on The Battle Of Los Angeles, most notably on Guerilla Radio, and then was used on the first Audioslave album on songs such as Like A Stone) and the Ibanez flanger has been replaced by an MXR Phase 90. 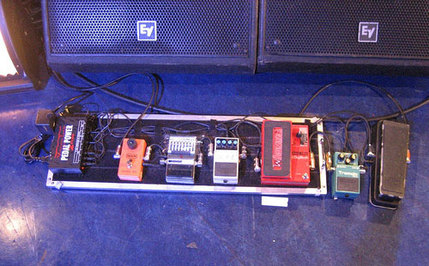 Tom has several tools that he uses on stage sitting on top of his amp.

One of Morello’s most famous soloing techniques is his inventive use of the toggle switch, which allows the player to switch between two or more pickups: “I first stumbled across this technique when I was in college and was saddled with an Ibanez Destroyer guitar. While everyone else was playing those one-knob/one-pickup, Eddie Van Halen-type guitars, I was playing a guitar with many, many knobs - very unhip at the time. I figured ‘Well, I got this thing, so I might as well use some of these knobs’.” Although having a lot of knobs on your guitar definitely will help, you can also recreate this with a Les Paul type of model - all you really need is a guitar with two pickups which have separate volumeknobs and a toggle switch. 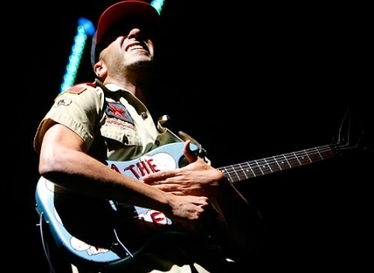 What Morello does, is putting the volume of the rhythm pickup to the minimum, while the treble pickup’s volume is on the maximum. “This way, I use the toggle switch as a ‘kill’ switch, to momentarily shut off the guitar sound completely.” You can create sounds in more than one way: by holding your guitar next to your amp, which creates feedback, by playing one or more harmonics or by rubbing your lefthand over the strings. No matter what, the righthand is always used to toggle the switch, which creates rhythmic patterns. Now let’s see how this is used in a song context.

During the Bullet In The Head verse, the whammy pedal is set up two octaves. For the ‘screech’ sound, Tom uses the toggle switch to create rhtyms: “During the verse there’s this ‘Farfisa organ’ sound, which is a combination of a couple of simple elements. Here I’m manipulating sheets of white noise, using the Whammy pedal and the toggle switch together... The Whammy pedal can be used as a harmonizer, and it also has a feature where it recreates what you play two octaves higher. At first I though that setting sounded horrible, but later I loved it. On Bullet, the Whammy is set to two octaves up, while the pedal is depressed all the way forward, which means that everything you play comes out two octaves higher. I hit one giant power chord composed entirely of open strings, with the toggle switch set to the pickup that’s off. I then switch back and forth between the pickup that’s on and the pickup that’s off to create the rhythmic pattern of white noise. Then I drop the pitch of the white noise by depressing the vibrato bar. The open strings are restruck at the beginning of each phrase. My left hand is manipulating the toggle switch, and my right hand is depressing the bar. The Whammy pedal stays full-forward the whole time.” As said, at the end of each phrase, Morello dive-bombs the tremolo arm to lower the last tone.

Another weird sound is the high-pitched ‘bird’ noise in the second verse: “The Whammy is still set at two octaves up, and I’m playing the harmonic at the seventh fret on the G string, which produces a high D. With the toggle switch set to the pickup that’s off, I pick the note, then switch the toggle to the pickup that’s on, simultaneously swooping up with the vibrato bar. Before playing [the normal sounding] part, I roll the Whammy pedal all the way back, which defeats it. Rolling the Whammy back sounds a little different than turning it off completely. It still fucks with the sound a little when it’s rolled back. I like that sound a lot and use it for other specific things.”

For the first part of the solo, Tom stands close enough to his amplifier to get feedback going (the more the better). He then uses the toggle switch (rhythm) and tremolo bar (melody) to create a musical sound. For the second part, he hammers the notes on his neck with his left hand while still flipping the toggle switch with his right hand and adding the wah wah at his feet in the brew.

For the solo in Sleep Now In The Fire, Morello uses the same trick as in the first part of the Bullet In The Head solo, although my guess is he used the whammy to create a much higher sound. To create that blanket of white noise during the verses the whammy is set a third down, by the way.

The solo in Bulls On Parade is played likewise, but this time the sound source is not feedback but rather string sliding. While manipulating the toggle switch with his right hand, Tom slides (he doesn’t press down, he just touches) over the strings above the pick ups. As in the verse, his wah is on during the solo but put down completely, so the sound gets a bit shrill. Bulls On Parade’s intro riff uses the whammy set one octave down and when the intro riff is then repeated, the whammy is left out but the wah is used, while some muted strokes accentuate the groove.

The first part of the intro and all the verses of Testify, which is played in dropped D tuning, use some kind of ‘sonic blanket’: “I’ve got my Digitech Whammy pedal set to a seventh, which means that any note I play on the guitar will be harmonized a minor seventh (five whole steps) higher when I rock the pedal forward. Using a real short, slap-back delay setting (which creates a reverb-like effect and helps to fill in the gaps in the sound) I hit the open low D string and then quickly flick the toggle switch back and forth between the neck and the bridge pickups, both of which are turned up all the way. While I’m toggling away, I slowly sweep the wah-wah back and forth between the bass and the treble frequencies. This may sound like a lot to do at once, but it’s really not difficult at all.” Instead of flicking the toggle switch, Morello also liked tremolo-picking the low D string.

For the solo, Morello once again found another sound source. This time he unhooks his guitar cable and creating rhythmic patterns by touching his guitar bridge - or any other metal part of your guitar - he rocks his wah wah to add some melody. This is usually combined with effects such as delay and his whammy pedal.