This article was based on two interviews with Neil Young, in the American Guitar Player and the French Guitare & Claviers magazines, both from 1992. Larry Cragg was also interviewed by Guitar Player. Obviously, Young’s rig has changed over the last 25 years, but still this article gives a nice indication about how he got some of his sounds at a time when he was releasing world class electric guitar music on albums such as ‘Ragged Glory’ and ‘Weld’.

Young’s main guitar is the famous ‘Old Black’, originally a 1953 Les Paul gold top which he got in 1969 in a trade-off for his orange Gretsch 6120 Chet Atkins. It has had a few modifications: a chrome Firebird pickup in the bridge position, a B-7 Bigsby vibrato tailpiece and, between the volume and tone knobs, a small toggle switch which allows Young to bypass all of the guitar’s electronics. His guitar tech Larry Cragg got Young another 1953 Les Paul gold top to be used as a stand-in. Another remarkable guitar is Young’s 1961 Gretch White Falcon, a stereo, single-cutaway model used with Buffalo Springfield and CSNY. Young prefers Dean Markley .010 - .046 strings and nylon gold Herco picks, Flex 50s. 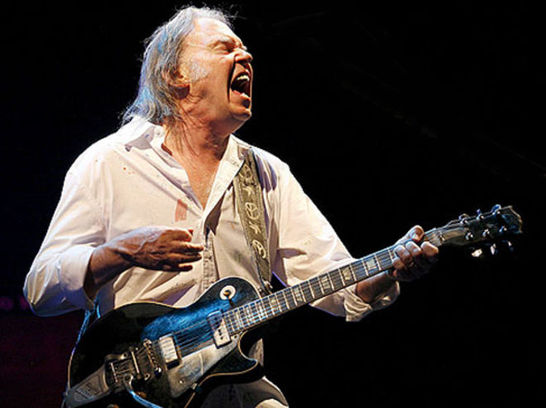 Old Black, Neil Young's repainted Gibson Les Paul goldtop with vibrato bar.
From the guitar, a cable runs straight into the input of an old white Fender reverb unit which is almost always on. The reverb pan is put seperately underneath the stage. “The springs are on a microphone stand that goes on the cement floor of the building”, as Young explains. “It extends up to the bottom of the stage, with the spring stands on top of the stand, and the wire comes through a hole in the stage completely separate. It can’t be very far away, because with a long wire, you lose the fidelity, the high end where the reverb lives, so the magic is gone. You’ve got to keep it close and really short. I can’t use it if I don’t do that, because if I jump onstage, the spring rattles. It has to be isolated from the surface of anything that’s vibrating.” According to Cragg, the Fender’s 6V6 and 12AX7 pre-amp tubes are essential.

Young’s pedalboard is in fact one big red wooden enclosure featuring twelve knobs. “I can’t use the small Boss pedals. Each time it’s the same thing: ‘Oh, we’re sorry’ and the whole thing smashes to bits. So I start them all from a set of metal switches, NASA quality stuff.” The button on the bottom right is to bypass all the rest and have Young’s guitar signal go straight from the Reverb Unit into his four input 1959 single-speaker tweed Fender Deluxe. 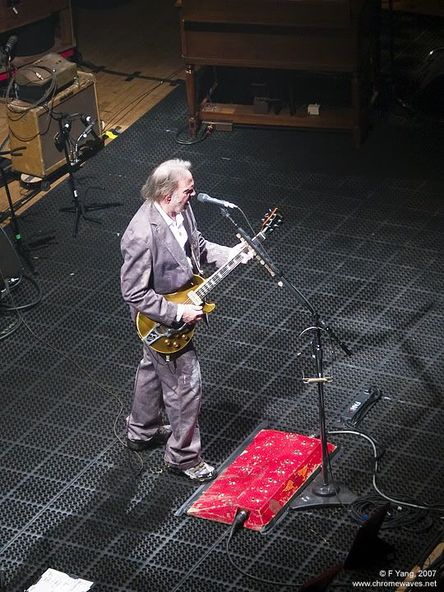 The big red box at Young's feet contains all his effects - and then some.
Young’s tweed Fender Deluxe is the narrow panel 5E3 model, with two channels, each with its own volume control, and a shared tone control, all three mounted at the top of the amp. “I got mine for $50 at Saul Bettman’s Music on Larchmont in L.A. in 1967”, Young said about his amp. “Took it home, plugged in this Gretsch guitar and immediately the entire room started to vibrate. The guitar started vibrating, and I went ‘Holy shit!’ I turned it halfway down before it stopped feeding back.”

On top of Young’s amp is the Whizzer, a device which is connected directly to the three knobs on top of the Deluxe. “It’s unique, totally original, and I’m really happy with it”, Young explained. “The pots on my amp are motorized and linked to the Whizzer. I adjust my settings on the digital controls of the Whizzer, which sets of the motor which actually physically turns the pots, to set the position. This setting pushes a button that, once it’s set off, turns all the dials on the amp to the desired setting. I’ve got four of them, so there’s no interruption in the sound.” 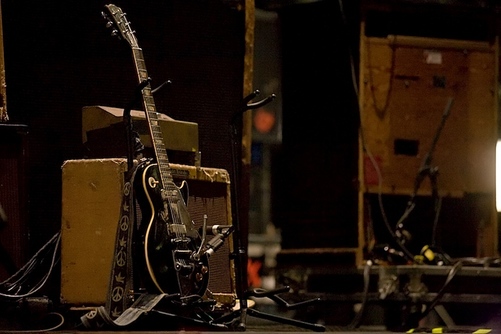 ​Old Black, Fender Deluxe and Whizzer: key ingredients to Young's tone.
Young started to use his first Whizzer, built by his late amp tech Sal Trentino, on ‘Rust Never Sleeps’ in 1978. Back then, only one knob could be connected, which could only be switched between two presets. Rick Davies built a much more elaborated version of the Whizzer, with the four presets controlling the three knobs, in 1991. According to Larry Cragg, these are Young’s settings:
The Whizzer allows Young to retrieve the unique sounds straight from his amp. In fact, he doesn’t use any overdrives, boosters or distortions to get his wall of sound. “The Deluxe goes up to 12 - not 11 - and with everything floored, if you back it down to 10½ from 12, all of a sudden it’s chunky sounding on the attack. If you have it up on 12, then it just saturates completely and opens up after the attack. But if you back it down, it’ll catch the attack.”

Once stored inside the Whizzer, Young can activate the four sounds using the four knobs on his red floorbox on the bottom left. “The volume on the channel you’re not using will affect the volume of the channel you are using, even when you’re not plugged into it, because of the drain on the power amp. Having the ability to bring up the channel I’m not even using - so the overload thing comes on - or to change the treble here and there, those are the things I couldn’t have done without this technology. Technology hasn’t affected the sound, only the control of the sound.”

With the four Whizzer-presets and the bypass, that makes for five buttons in the front row of Young’s red stompbox. The top row features seven more effects, which have been built into the box. From left to right, these are:

1. Mute and tune
Young uses 5 stroboscopic tuners, which are said to be the most accurate tuners.

2. MXR M-118 Analog Delay
There are a few different versions of this stereo delay pedal: three or four knobs, LED or no LED. All of them have the power chord attached though. The M-118’s schematic was later used as the basis for the well known MXR Carbon Copy. ​
​
​4. Musitronics Mu-Tron Octave Divider
The Mu-Tron adds an octave below the original input signal, either with or without the original signal. Designed by George Merriman, it was not just another Octavia clone, since it had many more adjustable parameters than the one used by Jimi Hendrix.
The Mu-Tron is mainly used together with the MXR Analog Delay to fatten up the octaves, as can be heard in ‘Out of the Blue’. “I do a lot of things to make the sound more distorted, like by introducing an octave divider in conjunction with an analog delay, which is before the octave divider. The routing of these things is really important - what hits first and then gets hit by something else.”

5. Master loop
Used by Young to switch on and off any of these effects, except for the Echoplex (see below), which remains on most of the time. “I have a line of six effects, and I can bypass them completely or dip in and grab one without going through the one in front of it. Or I can use all six of ’em or any combination that I want. I set them up in any order so that they affect each other in a certain way, and that’s how I get my sound.”

6. Boss Flanger BF-1
This four-knob blue effect pedal used the same enclosure as some of the Roland pedals from the mid-seventies such as the AP-2 Phase II and AF-60 BeeGee. It was sold between 1977 and 1980 and then replaced by the familiar purple BF-1 stompbox. A real strange unit, according to Cragg, only used when Young wants to go totally crazy.

6. Alesis Microverb
Set to 100% reverb, it provides Young with the atonal, high frequency feedback squeals often heard in his solo’s. “I have a digital echo that I use because it has a particular gated-echo sound”, Young said. “When I tried it out at the Guitar Center in Hollywood, the salesmen were demo-ing all these sounds like on a Phil Collins record or the background of a Cyndi Lauper record. I said ‘Let me try it for a minute’, turned everything all the way up except for the mix, and then I started playing the guitar really staccato. I turned the mix up and got ‘whop, whop, whop, whop’, like this giant popcorn machine exploding kind of a sound. I like that sound, so I use it as an effect. When I’ve gone just about as far as I can go, I stick that on it and just hit harmonics and choke them. It splats out all this ridiculous noise all over everything. But I don’t use it in a real sense to get a sound that it was meant to get.”

7. Maestro Echoplex
The original Echoplex was a tape echo effect, which record sound on a magnetic tape and then play it back. The Echoplex’s big innovation was the moving recorder head, which allowed the user to change the delay time. Electronics technician copied the design from the EchoSonic, an amp designed by Ray Butts in the fifties and used by Chet Atkins, Scotty Moore and Carl Perkins among others. In the sixties, the Echoplex was built by Market Electronics and marketed by Maestro. Besides the Fender Reverb Unit, this is the effect Young uses the most.

From the Echoplex, the signal goes into Young’s tweed Deluxe. The extra speaker output is then connected to a Magnatone 280 2x12 stereo vibrato amplifier, used by Buddy Holly and Lonnie Mack among others. It’s not very clear where the input for the enormous Baldwin Exterminator transistor amp, featuring 2x8, 2x12 AND 2x15, comes from. However, Young uses his own private Yamaha mixer to get his own sound out of the two Maryland Sound 2x15 monitor cabinets which he has on stage. While the audience mostly hears Deluxe and Magnatone, Young prefers mainly Deluxe plus lots of Baldwin. With 2000 watts of biamped power, the monitors are a vital part of Young’s set-up as they produce the feedback. 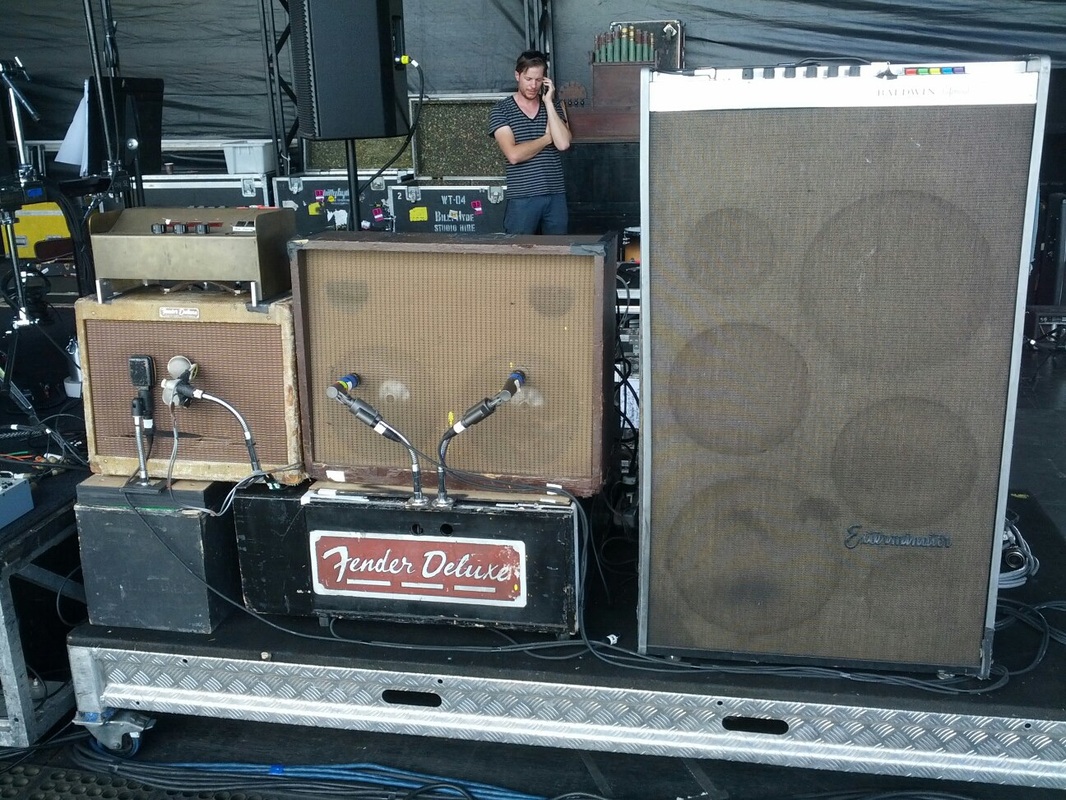