“Guy Peellaert was to Europe what Andy Warhol
was to America - except that Guy had more talent!”
Jim Steranko (American comic book artist,
art historian, publisher and film production illustrator)

Guy Peellaert was born on April 6, 1934 in Brussels, Belgium, into a wealthy and influential aristocratic family. This would prove to be a source of embarrassment throughout Peellaert's life. Peellaert rebelled against his parents by immersing himself in jazz (particularly George Gershwin, Duke Ellington and Nat King Cole), film noir, pulp literature and Anglo-Saxon pop culture in general. Later on he would even volunteer to fight in the Korean war - according to Noemie Mainguet, his friend and agent, "He wanted to prove to himself that the world is not so easy". He left home at an early age and refused to have any contact with his father for many years. Although quite indifferent towards school, he went on to study Fine Arts after high school.

In the mid sixties, Peellaert moved to Paris, where he started working as an advertiser, decorator for theaters and comic strip artist. He designed sets for the famous Crazy Horse saloon, the Casino de Paris and the Roland Petit ballet company. In 1966, the satirical comic magazine Hara-Kiri ("le journal bête et méchant") published Les aventures de Jodelle, written by Pierre Bartier and drawn by Guy Peellaert. According to New York magazine, it "set a new record in comic-strip sophistication". The story is a psychedelic satire of spy romans, Asterix comics and Flash Gordon. Influenced by the pop art movement, Peellaert modeled the protagonist after French singer Sylvie Vartan while other characters were based on the Beatles, James Bond, the Marquis de Sade and Jesus in person. 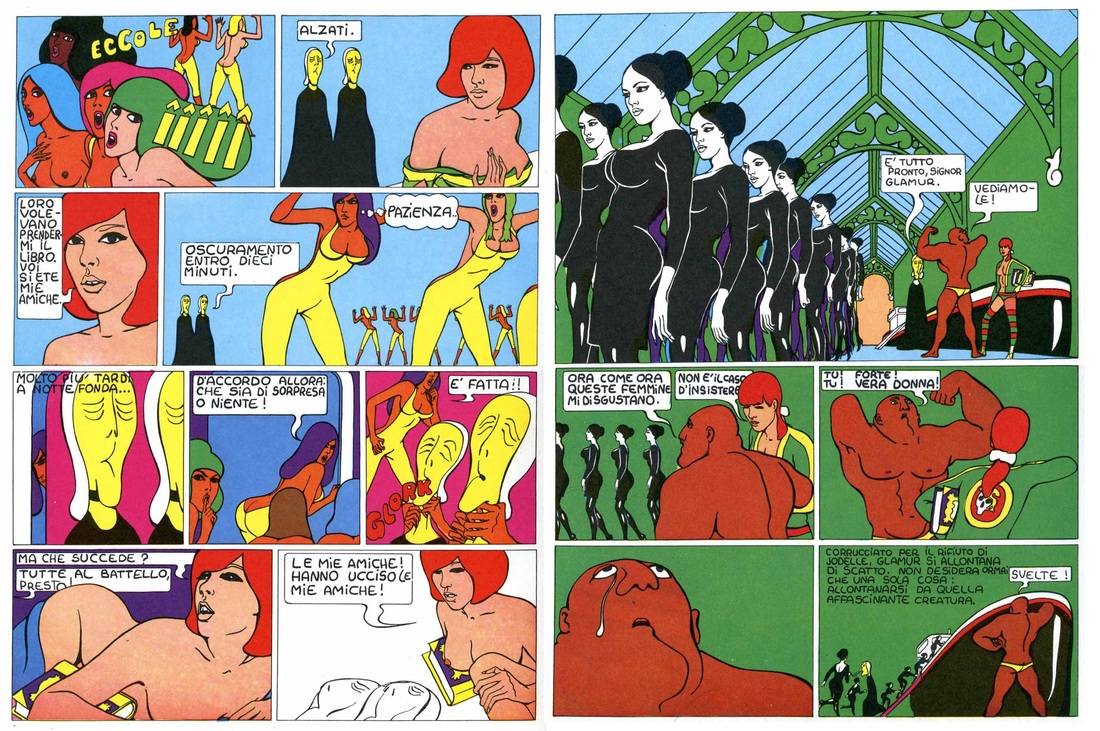 For his second comic strip, Pravda, la surviveuse, published in 1967, Peellaert was inspired by another chanteuse, Françoise Hardy. Pravda is the leader of an all-female motorcycle gang which rides across a Mad Max-like American landscape. The comic was an instant hit on the European underground scene and is now looked upon as a classic piece of art. It has been featured in exhibitions at the Musée d'Orsay and the Pompidou Centre and received praise from Jean-Luc Godard, Mick Jagger and Federico Fellini, who called it "the literature of intelligence, imagination and romanticism". 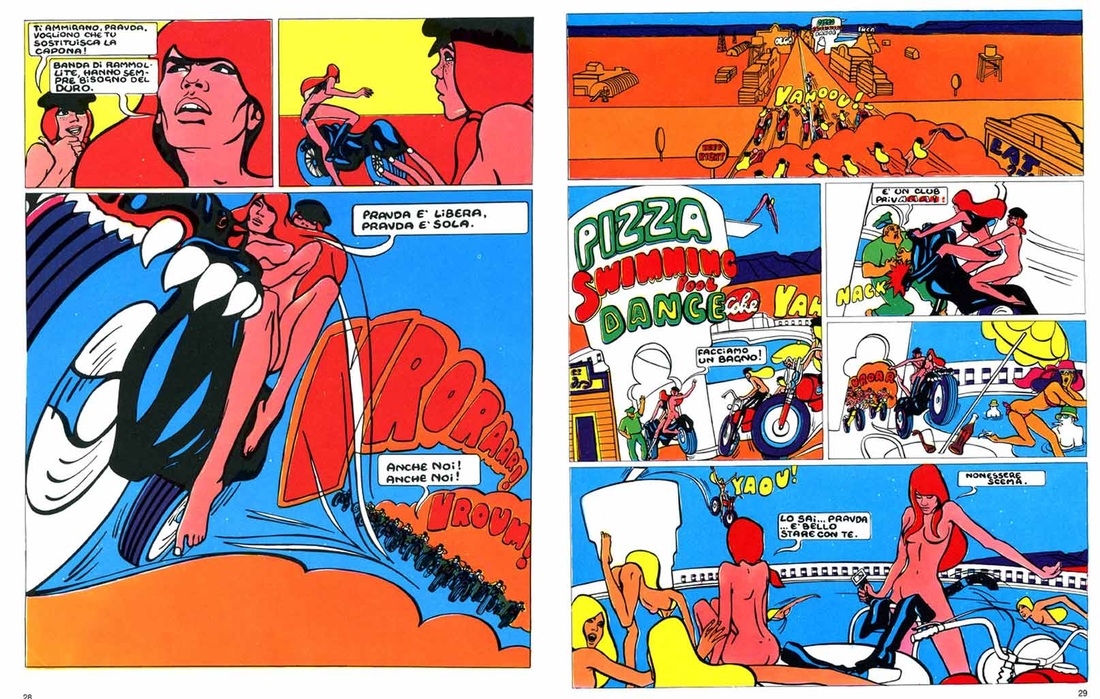 Next, Peellart relocated to Germany to start working in animation. He tried to adapt the book Awopbopaloobop Alopbamboom by English writer Nik Cohn into a TV series. "I wanted to make three-minute films of, say, Johnny Cash and Jerry Lee Lewis as truckers. Jerry Lee ends up in jail for corrupting a minor and Johnny comes to bail him out. Things like that, playing with their lives. The first episode would have been about a singer in Nashville, a kind of tragic hero. Johnny Cash was interested but the producer insisted on the German star Udo Jurgens. We decided to turn our stories into a book."

The duo thought of their book as a series of stills from an 'impossible' motion picture, accompanied by small texts. "We wanted to make the book believable, so straight drawing wasn't enough. We had to get this lived-in quality into the images, what people now call photo-realism." After Cohn wrote down the scenarios in a few weeks' time, it took Peellaert three years to get the artwork done, using photographs and paper cuttings to create dreamlike, timeless collages, putting rock 'n' roll's biggest stars into situations that echo their mythical status or their most famous lyrics. 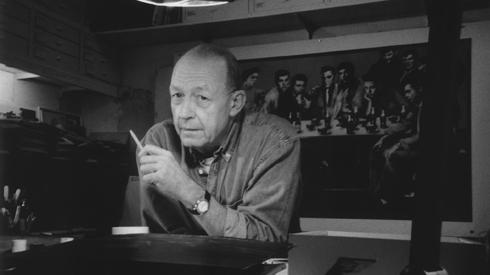 "Our partnership worked because we approached things from diametrically opposite positions," said Cohn. "Left to my own devices the book would have been the death of rock, not dreams. But although Guy had his dark side and was attracted to these themes, he infused them with love. He was the fan weeping at the foot of the coffin. I was the fan laughing at the foot of the coffin." Peellaert agreed: "Nik was the music specialist and I was the dreamer, the fan. It was quite a nice marriage." "He approached it as a sort of hyper-fevered fan," Cohn added, "who was suddenly presented with a series of fantastic dreams where he could meet his heroes."

Peellaert became an internationally renowned artist after the publication of Rock Dreams. John Lennon framed the cover of the book and both Mick Jagger and David Bowie asked him to provide a cover illustration for their albums. Peellaert promised to work exclusively for the Rolling Stones but when he didn't hear back from them, he designed the grotesque half-Ziggy, half-dog creature portrayed by David Bowie on the cover of Diamond Dogs. On the back of the original gatefold sleeve, some genitals could clearly be seen - but these were quickly airbrushed after the first batch went out (originals are worth a couple of thousands of dollars now). Five months later, Mick Jagger could be seen parading down a Busby Berkeley staircase on the cover of It's Only Rock 'N' Roll. Today, many of Peellaert's originals are owned by actor Jack Nicholson.

After Rock Dreams, Peellaert started working on The Big Room, a second coffee-table book which took him over ten years to complete. A collaboration with American author Michael Herr, the book is a darkly surrealistic homage to Las Vegas, portraying the city as "a big hotel lounge where everybody comes in, out, with their luggage, their problems, their dreams". Among the people to come in and out were Joe DiMaggio, Liberace, Marilyn Monroe and Sugar Ray Robinson. "I like city rats, in the noble sense of the word, the sex-appeal of neon lights and Formica."

The same year, Peellaert made the news when for some New Year greeting cards, commissioned by controversial French interior minister Jean-Pierre Chevènement, he designed The republic against the mug ones, a collage featuring General De Gaulle in a Hitlerian pose with his arm around Marianne, symbol of the French republic but shown here as a whore, while Napoleon is doing something dirty with Joan of Arc in the background. "Chevènement doesn't like Napoleon much," Peellaert innocently explained. "I was only following the minister's orders." 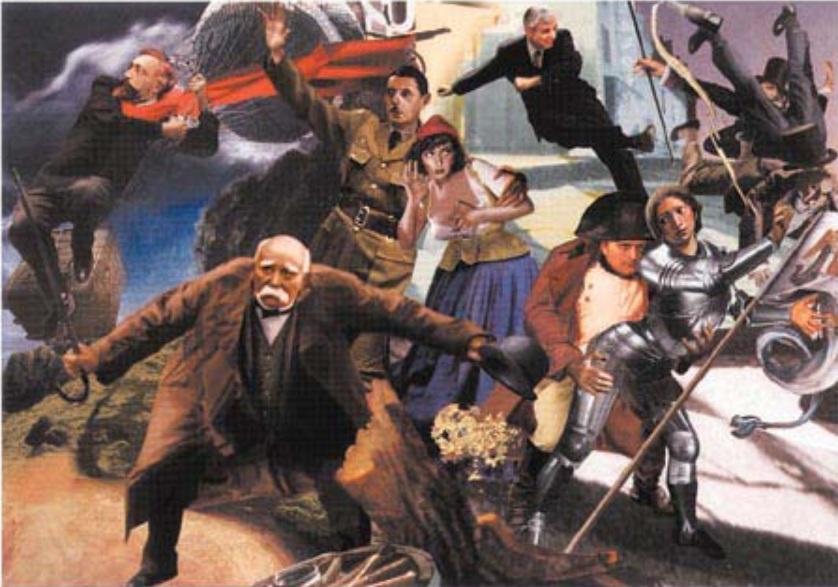 Peellaert's last work was Fashion Dreams, published in 2008 and featuring Madonna, Vanessa Paradis and Tina Turner among others. Guy Peellaert, painter, comic artist, designer and photographer, died in Paris on November 17, 2008 at the age of 74 of cancer. His remains can be found in the famous Père Lachaise graveyard.

"I'm not bothered about death. Not having any passion while you're alive, that's the terrible thing. That's why Rock Dreams still works today. Emotions keep you alive. Rock will always represent the extravagant, the flashy, the fantasy. These pictures are a memento to that dream."